I also got to hear a challenging message from Brian McLaren. I have read many of his books; it was a blessing to finally hear him in person. I appreciate ACU for having the willingness to give him a forum. I do NOT share his endorsement of Obama, but I appreciate his thoughts on theology and Christianity. His presentation today did not disappoint.
Posted by Jeff Foster at 9:44 PM 1 comment:

Ed Hochuli is having a bad week. That's an understatement!

For the uninitiated, Hochuli is a NFL referee (one of the best) who blew a call in Sunday's Chargers at Broncos game that was instrumental in the Chargers defeat. Hochuli blew his whistle as Broncos quarterback Jay Cutler lost his grasp on the football, meaning the play was dead and thwarting the Chargers recovery of what was a fumbled ball. Hochuli thought the dropped ball was an incomplete pass, and so he blew his whistle. By rule, Hochuli had to reward the ball to the Broncos, who went on to score a touchdown and make good on a 2-point conversion play, giving the Broncos a 39-38 victory over their division rival. Had Hochuli allowed the fumbled play to work itself out, the Chargers would have recovered the ball, run out the clock, and returned to San Diego as 38-31 victors in a very crucial game.

Hochuli is now the toast of Denver, and the target of derision and scorn in San Diego. Can you imagine blowing it on a bigger stage than an NFL game with millions upon millions of spectators and viewers? Yet, even though I am a Bronco fan (#2 after the Cowboys--yes, I'm one of those twisted few), I'm pulling for Hochuli to resuscitate his reputation as one of the finest, if not best, NFL referees. I hope he is able to deal with this mistake and move forward.

I hope NFL fans will allow him the opportunity to move past it. We (speaking of humanity in general) can be awfully hard on people when they make mistakes. In our self-interests and self-pride, we are quick to ridicule and castigate others who seem to ruin our day. But, we all make mistakes, don't we? I know I have made my share. You'd think, knowing our own frailties, we would be a lot on easier on others when they mess up. Or, as someone once said, If you want some slack, you've got to be prepared to give it in return.
Posted by Jeff Foster at 10:40 PM 1 comment: 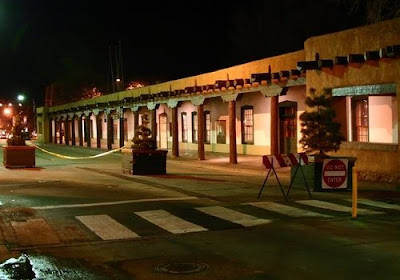 It has been more than a month since I made a posting here. Hopefully, in the next few days I can get back into the swing of things and begin to offer some semi-intelligent observations and commentary. We'll see . . .

I have the spent the past 5 weeks at home in Gallup. It has been the longest break I have had from travelling since early January. The break has been good. The five weeks have been filled with activity, though. I've especially enjoyed the opportunity to do some preaching and teaching for the Gallup church. I like going out on the road and speaking on behalf of the Manuelito Navajo Children's Home, describing our ministry to churches, but I love being able to get back to regular preaching from time to time. And, this time off the road has given me that chance. And, I've had the chance to get back to my youth ministry roots, having the opportunity to direct a lock-in and teach some teen Bible classes during my break from travelling.

But, today, I have set out on the road again. I will be travelling for much of the next seven weeks (with a short 3-day layover in Gallup in the middle of this span). I am in Santa Fe tonight, and will be going to Lubbock tomorrow. Then, its off to Abilene Christian University and Harding University for the lectureships at these schools. I'll also be speaking at churches in Mineral Wells, Texas and Childress, Texas, and be spending a couple of nights in Louisiana and making visits to some churches there. Following my 3-day respite at home, I will be setting out for the left coast, spending four weeks in northern California and Oregon.

I've never been north of Ventura, California on the Pacific coast, so I'm looking forward to this trip with a lot of excitement. In addition to speaking to churches in Sacramento, Oakland, Fresno, and Portland, Oregon, and making several other visits, I hope to see the spectacular sights at Yosemite, the Sequoias, the giant Redwoods, San Francisco Bay, and perhaps most interesting to me, Fort Clatsop, west of Portland. Fort Clatsop is where the Lewis and Clark Expedition spent the winter in 1806 and was the western-most terminus of their historic journey.

In the days to come, I hope to begin posting some things much more serious and meaningful than my travelogues. Stay tuned.
Posted by Jeff Foster at 11:57 PM 1 comment: