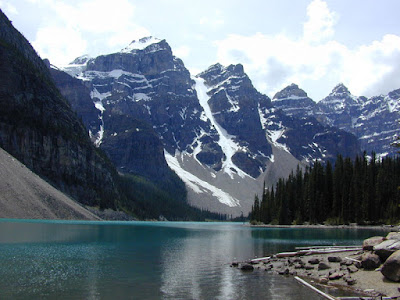 (Note: the photo above is not mine. Not sure who took it, but I love it!)

Some people work behind a desk, or on the seat of a tractor . . . I, on the other hand, have the blessing of "working" in places like this. As I have traveled around the country on behalf of Manuelito Navajo Children's Home, I have seen so many beautiful places. Wolf Creek Pass is one of the prettiest . . . and has been on my favorite's list for many years.

Enjoy these pictures I took on Monday. I especially like the "heart-shaped" rock. 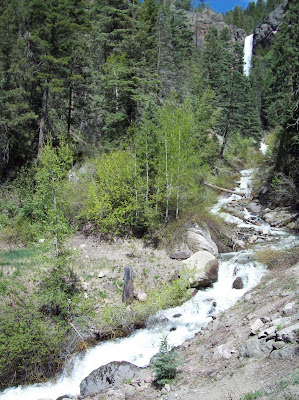 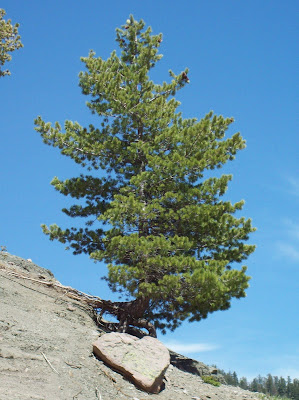 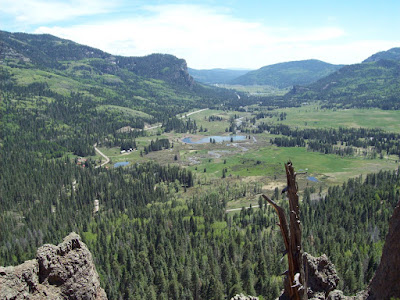 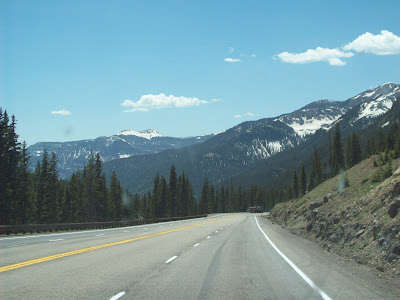 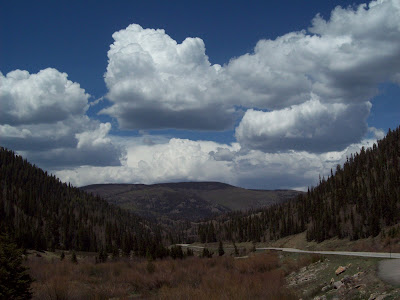 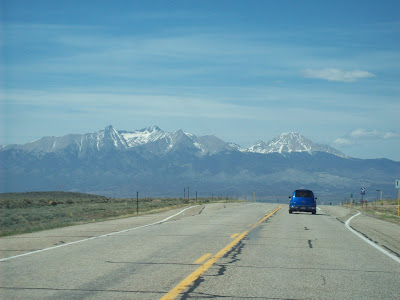 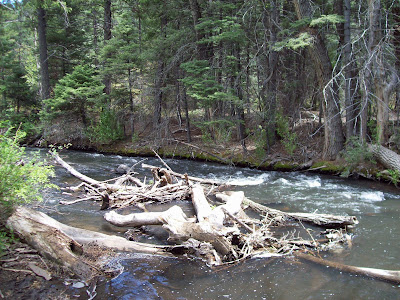 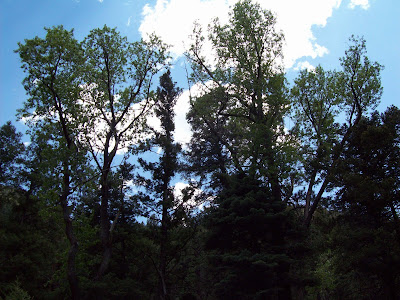 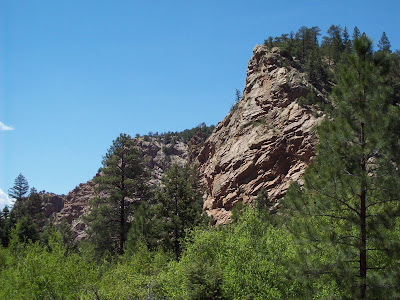 Have You Seen This Bird? 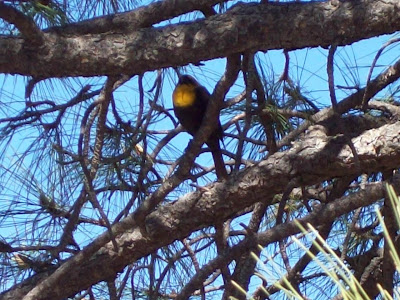 I'm curious. Can anyone tell me what kind of bird this is? I saw it yesterday. It was perched in this tree on the shore of Luna Lake in far-eastern Arizona. It made a rather unusual shrill cry, much louder than its size would suggest. 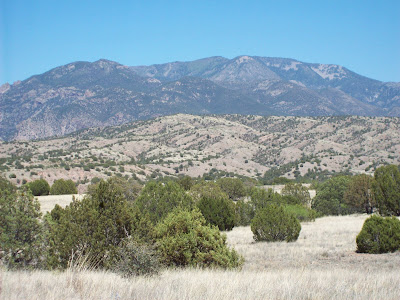 The Apache Chieftan Geronimo was born on the far side of this mountain in 1820. This is a view of Mogollon Baldy Peak (looking east) in the Gila National Wilderness, southwestern New Mexico.
Posted by Jeff Foster at 10:46 PM 1 comment:

Did you know that 8 billion Bibles have been printed since 1816? Over 100 million Bibles are being printed each year. Over 90% of the world's written languages now have at least a portion of the Bible in print. There are an average of 4 Bibles in every house in America.

I'll admit it, my view is biased. I believe without hesitation in the divine nature of the Bible. I believe the apostle Paul when he declared, "All Scripture is God-breathed" (2 Timothy 3.16). I am convinced in the voracity of Peter's words, when he said, "prophecy never had its origin in the will of men, but men spoke from God as they were carried along by the Holy Spirit" (2 Peter 1.21). The words of the Psalmist are true: God's Word is "more precious than gold, than much pure gold; they are sweeter than honey, than honey from the comb" (Psalm 19.10).

What amazes me about the Bible is that it is the product of the joint labor of God and man.

There is a great diversity in the way in which the books of the Bible were written. Moses, as he presented a written copy of the Ten Commandments to the Israelites, declared that he had written the words God spoke, and the people declared in response, "We will do everything the Lord has said; we will obey" (Exodus 24.7). Jeremiah, and other prophets, spoke of the word of the Lord coming to them, and the implication is that they then preserved those words in writing. Luke doesn't refer to dictation as he explained his writing technique to Theophilus, his intended audience; instead, he spoke of "having carefully investigated everything," so that he could "write an orderly account" (Luke 1.3). Paul interjected "opinion" (actually, discerning judgment) alongside instruction he had received from the Lord (1 Corinthians 7.10-12, 25-26, 40). The apostle John explained that the Lord told him, "Write on a scroll what you see" (Revelation 1.11), implying a certain amount of subjectivity in preserving in writing a description of the scenes witnessed in his ecstasy. And, then there's the examples of so many psalmists who cried out to God, not in rote ritual, but in honest, heartfelt expressions, such as the one who cried out in vindictiveness, "O Daughter of Babylon, doomed to destruction, happy is he who repays you for what you have done to us--he who seizes your infants and dashes them against the rocks" (Psalm 137.8-9).

What do these references show us? Could it be that the image of a Bible writer (like Moses, David, Paul, or John) huddled in a corner, entranced, and diligently writing down words as they are supplied by the Spirit is rather simplistic? There are instances of dictation, to be certain. Moses, as he was on top of Sinai, wasn't given much of a freehand, it would seem. And the prophets spoke as they were directed by God to speak. But, it would seem, many of the human writers of Scripture had a freehand, to some extent. Or, perhaps it would be better said, many authors were enlightened to write, blessed with certain opportunities and experiences, blessed with being in the right place at the right time, blessed with spiritual insight, and blessed with capacities of remembrance or understanding, but with the freedom to express themselves in words that were their own. But, before you think I'm saying more than I'm saying, these authors, freehand aside, were directed by God. God, in his infinite wisdom and ability molded together the divine and human, and the timeless Bible is the product.

God could have done things differently. He could have tossed down the completed Bible from heaven's presses above to the earth below. He could have stamped each copy with his own autograph. But, he didn't do this. He used men (and perhaps a few women; remember, Deborah, and her song?). Consider this: God spoke to mankind through the words of men. How intimate! And, not without precedent. John, one of those writers of Scripture, said, "And the Word became flesh and made his dwelling among us. We have seen his glory, the glory of the One and Only, who came from the Father, full of grace and truth. . . . No one has ever seen God, but God the One and Only, who is at the Father's side, has made him known" (John 1.14, 18).
Posted by Jeff Foster at 9:33 PM 1 comment: 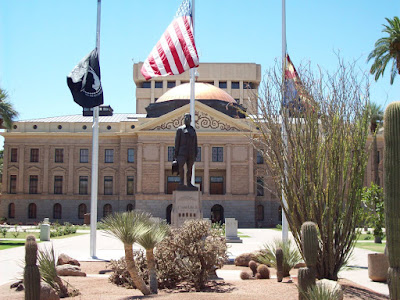 The Arizona State Capitol is a beautiful and impressive building, but there's not a good angle from which to photograph it. These pics are the best I could do. 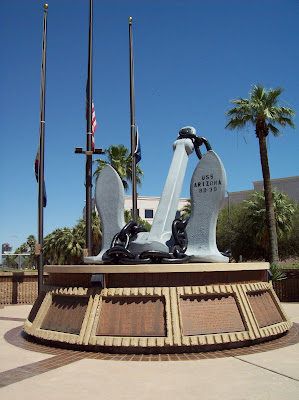 The anchor from the U.S.S. Arizona 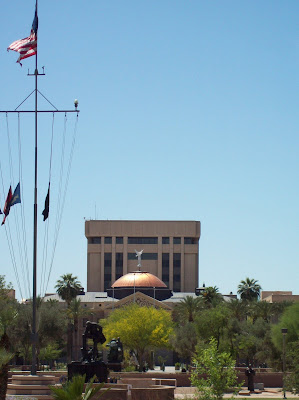 A view of the bronze dome of the Capitol, with the mast of the U.S.S. Arizona in the foreground. 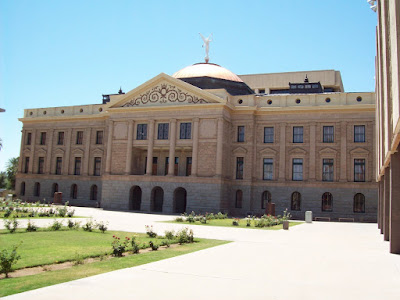 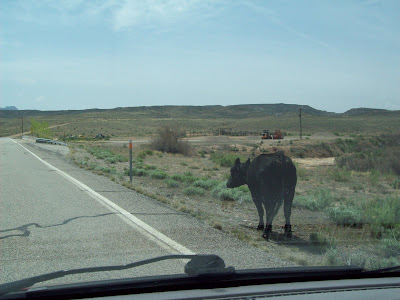 Mooove over! Welcome to Utah! 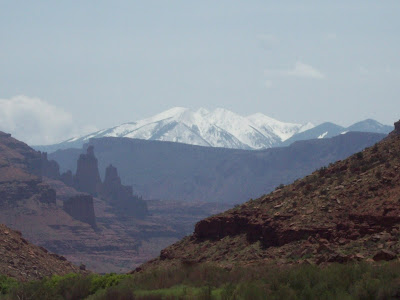 The drive through eastern Utah is one of my favorites. This is a view of the La Sal Mountains from the Colorado River northeast of Moab, Utah.
Posted by Jeff Foster at 11:12 PM 1 comment: 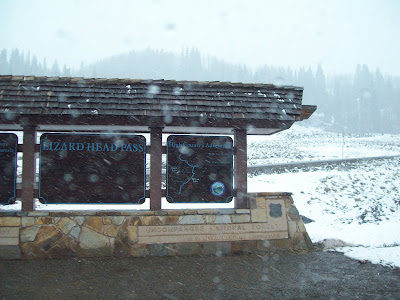