A Matter of Convenience?

The setting was the shore of Gennesaret (Sea of Galilee), and it was the morning following an evening of intense but fruitless labor. Simon and his partners were wrapping up their disappointing night of work to head home,  empty . . . without the catch that fed their families. 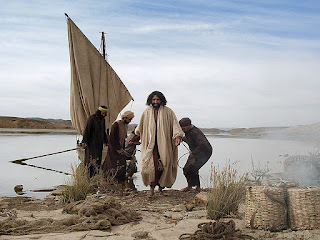 But then he came. Jesus came. And scores of people were in his wake. And he needed a platform . . . a boat, to be used as a speaker’s dais, from which he could be removed from the crowd, but heard and seen by all.

We don’t know the thoughts of Simon, at this point. Perhaps he was glad for the diversion from the failure of his night’s work. Perhaps he was eager to put the nets down and hear from the man who had recently healed his mother-in-law. Perhaps, though, his thoughts were a lot like our own when our time is co-opted by something that takes us off task, or away from the rest we desperately crave.

Would I have opted to sit through a sermon after enduring a long and disappointing night of labor? I wonder. And what of you?

The attendance in our Sunday church services might give us a clue about our behavior in that moment. Perhaps we’re talking apples and oranges, but I see to many people who are quick to spurn a gathering of the church for may other things. And those absences are with a good night’s rest enjoyed beforehand. Simon and his partners opted to hear Jesus after their long night of labor. His words became their priority and not their plans for rest. The schedule for their day became quickly altered when Jesus showed up.

Am I overly cynical to say that we have made our faith too often a matter of convenience? Am I too judging to say that we have relegated meeting with our church family to the bottom of our list of priorities? As long as it doesn’t interfere with our work, our fun, and our rest, we will be there. Is this how we do things?

Would you have stayed to listen to Jesus after a long and fruitless night of labor?
Posted by Jeff Foster at 2:41 PM