The Naming of God in the Story of Noah

An intriguing feature of the story of Noah and the Great Flood, one that almost goes unnoticed, is the naming of God in the story.  God has two names in the story of the Flood.  These two names give added meaning to the story; indeed I don’t know if the story can be fully appreciated without the knowledge that in it God is given two names.

For much of the story, God is referred to by the name Elohim.  The name, in English, is simply, “God.”  Elohim is a rather generic name for God.  It is the most common name for God in the Hebrew Bible.  Elohim emphasizes the majesty and transcendence of God above all creation and over all other gods.  The name can even be translated “God of gods” or “All gods in One,” for that is the concept inherent in the name. 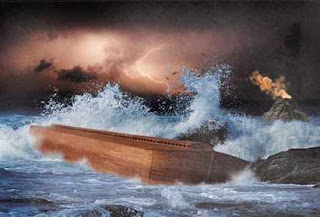 In certain scenes of the Flood narrative, though, God is called by the name Yahweh.  Yahweh (or, Jehovah), in English, is “Lord,” or “Lord God”  (The term “Lord God” is Yahweh Elohim).  Yahweh is the most personal name for God in the Old Testament.  Yahweh was the name given by God to Moses at the sigh of the burning bush in Exodus 3, on the occasion of God calling Moses to return to Egypt and free his people from bondage.  Yahweh is God’s covenant name, the name of God that stresses his great love for and interest in the well-being of man.  Yahweh is a very intimate name; it is the name God cautioned the Jews to not misuse in the third commandment, “Thou shalt not take the name of the Lord thy God in vain.”  (Although, the Jews misapplied the meaning of this command; they went as far as condemning the public usage of the name and even its mere utterance and writing.)

In the Flood narrative, the name Yahweh is used strategically and purposefully.  It is used in three specific scenes, along with an isolated fourth reference.

Yahweh is used in Genesis 6.5-8, the scene where God’s sorrow over the sinfulness of the world is expressed.  It is here, in this paragraph, where God’s intent to judge the world is made known and where Noah’s finding favor in the sight of the Lord is reported.

Yahweh is used in Genesis 7.1-5, the scene where God commands Noah to enter the ark, taking with him seven pairs of every clean animal and one pair of every unclean animal.  God tells him (in more detail than before) of what is going to transpire; namely, the world will be destroyed by flood and only those onboard the ark will survive.

Yahweh is used in Genesis 7.16, in the statement, “And the Lord shut them in,” describing God’s action of closing the door on the ark.

Yahweh is used in Genesis 8.20-22, the scene where Noah, having just left the ark, offers sacrifices to God.  God’s favorable response to the sacrifices is noted.

In each of these scene, God is shown acting in a personal manner; in other words, he is shown having human qualities and behaviors.  In Gen. 6.5-8 and 7.1-5, God sees.  What he sees, causes him sorrow (he has emotions).  In 7.16, he shuts the door of the ark (an action).  In 8.20-22, he smells the offering made by Noah, and he is pleased (again, and action and emotion).  In these passages, God is shown acting in a personal manner: he senses, he has emotions, and he acts.

What is the effect of this composite portrayal of God?  He is real.  God is a participant in the story—an active participant.  He is not a distant deity destroying the world on a whim.  He is an involved God fully conscious of what he is doing.

In his alternating between Elohim and Yahweh, the inspired author is teaching us that God takes an active interest in the affairs of man.

Remember, Elohim is a name for God that emphasizes his greatness, his transcendence above all else.  It is an important name, a name we should know and respect, but it is a name, when used by itself, which gives us an incomplete picture of God.

It is easy to see God as aloof, distant, above everything.  Many see God as all-consumed in himself, we cannot rise to his level, he cannot stoop to ours, so there is this wide gulf between God and man.
In the Flood story, it is easy to see God in this light.  A perfect God destroying a far-less-than-perfect world.  The act could be seen as being doing by a God who could care less.  He can always start over and make a more perfect world.

In the story of the Flood, God is not looking to destroy man, but to have fellowship with him.  Punishment is due (and deserved), but restoration is offered.  God delivers humanity by taking Noah and his family and delivering them from the Flood.  Indeed it really is more a story about Noah (man) than a story about a Great Flood.

Believe it or not, I received a lot of spankings as a child.  My dad could give a good spanking.  He wore a wide heavy belt; it stung; it got the message across (I was just a slow learner).  But, I remember that every spanking was followed by a hug.  Why a hug?  It was my fathers’ way of reaffirming his love for me.  My behavior demanded punishment, but that did not mean he had stopped loving me.  I remained his son, he remained my father, and the hug reinforced these truths.
Just as a father hugs his son after disciplining him, the alternating names used in the story of Noah affirm God’s eternal love for mankind.  He is Elohim, and his greatness demands our respect and reverence—he remains King and Judge.  He is Yahweh, and his love for us is everlasting—he wants to be our Father.
—Jeff Foster