Trouble Was, He Never One a Battle

General George S. McClellan was a smart general. Trouble was, he never won a battle.

McClellan graduated first in his class at West Point. His intellect was better than most. As the Civil War erupted, President Abraham Lincoln called on McClellan to be commander of the Union Army of Northern Virginia, the main fighting force arrayed against the armies of the Confederacy. 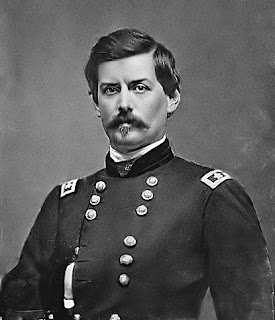 In every respect, McClellan's force was superior to that of his Confederate counterpart. He had General Robert E. Lee out-manned, out-gunned, out-resourced, and out-trained. Unfortunately, McClellan lacked the initiative and daring of Lee and the Confederate Army.

McClellan was timid. Before he sent his troops into battle he wanted every "i" dotted and every "t" crossed. He spent hour after hour drilling his troops and scouting out the enemy, waiting for the perfect momen to strike. As noble as his efforts were, they were all for naught. McClellan's army never won a battle against its adversary.

Boldness (notice, I did not say brashness) . . . boldness is a product of faith. It is confidence in God's eternal presence and provision of his people. Let us boldly be the people of God in this world. Let us not be intimidated by any task. Let us not doubt any outcome. Let us boldly put to use our abilities, resources, and opportunities. Let us not give the initiative to our Enemy, for timidity has never led one to victory, but is all-to-often the path to defeat.
Posted by Jeff Foster at 10:33 PM